A typical warehouse-building with an access to the Livenza.

Located in Piazza Duomo, Palazzo Ovio-Gobbi stands out for its serene, harmonic and moderate traits, still majestic and artistically pleasant. While today it houses the Parish, in the past it was the house of noble families like Ovio and Linardelli and, later, of the middle-class Gobbi family.

Built in the early 17th century by the Ovio family on a previous Gothic building owned by the Roman Puccio family, it boasts a façade with a mannerist portal and a three-arched window decorated by an Istrian stone cymatium. It is a typical warehouse-building with an access to the Livenza, dating back to the same period as the other buildings on the main square. The entrance hall is still decorated with its ancient rough stone tiles.

During the 18th century, the building underwent various restoration and refurbishment works, aimed at highlighting its magnificent interiors with frescoes and stuccoes. The decoration of the noble floor has reached the present day in the main hall and in two smaller rooms, facing respectively North and South and flanking the staircase.

The stucco decorations on the ceiling in the main hall enclose a large fresco depicting the Apotheosis of the Ovio home, where the family emblem is placed close to Justice and Fame. The figures are represented according to modules clearly inspired by Tiepolo. One of the long walls hosts a female figure with a parrot in her hand, standing over a balustrade, who may be Caterina Cornaro Queen of Cyprus. The fresco is dated MDCCLXVI. The frame under the ceiling hosts the paintings of some busts of Roman emperors (Cesar, Augustus, Vespasian, Titus, Trajan), resembling a gallery of marble busts in small niches. The stucco decoration is extremely beautiful: on the walls, elegant mirrors host allegorical figures, most likely the four seasons, while on the ceiling delicate and light rocaille motives remind of an embroidery. 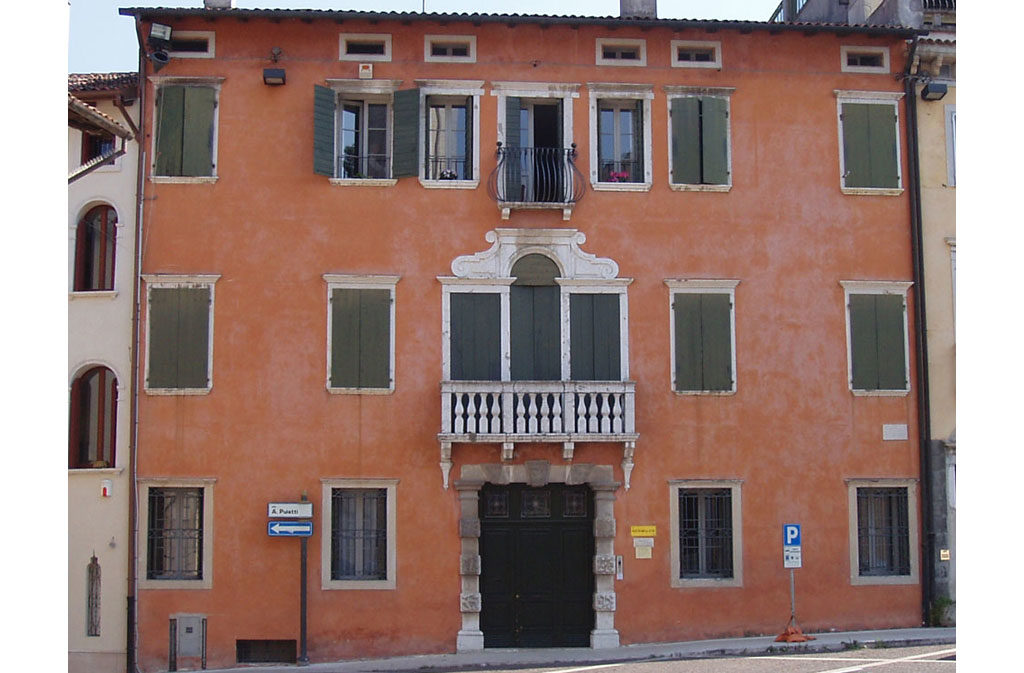 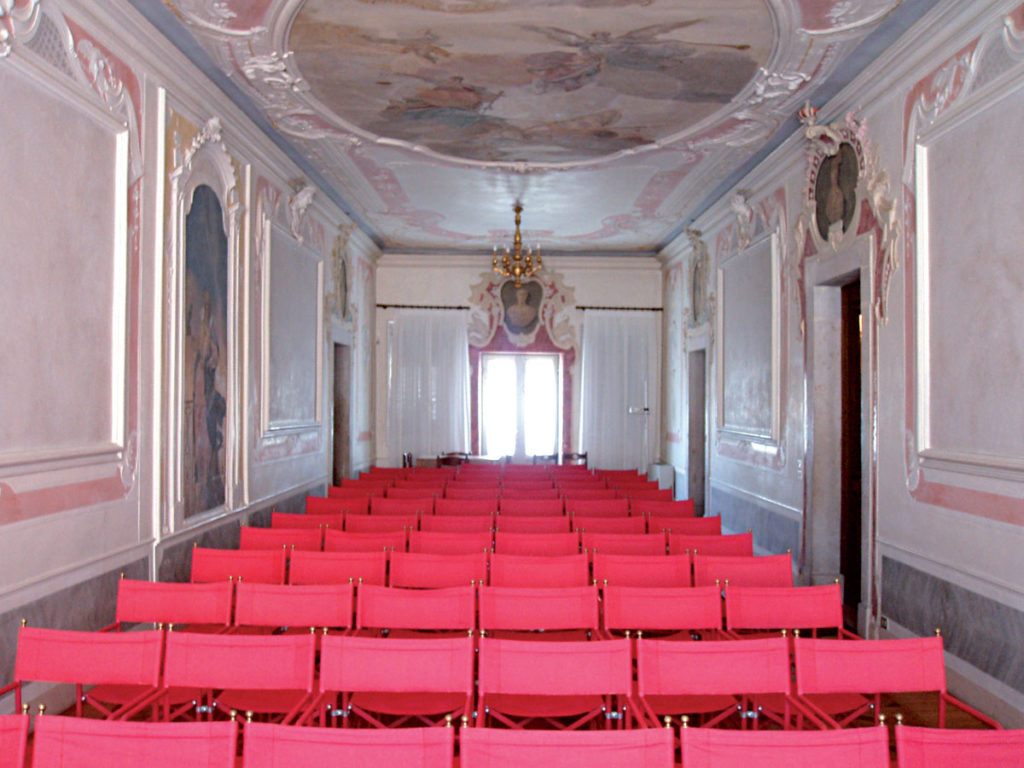 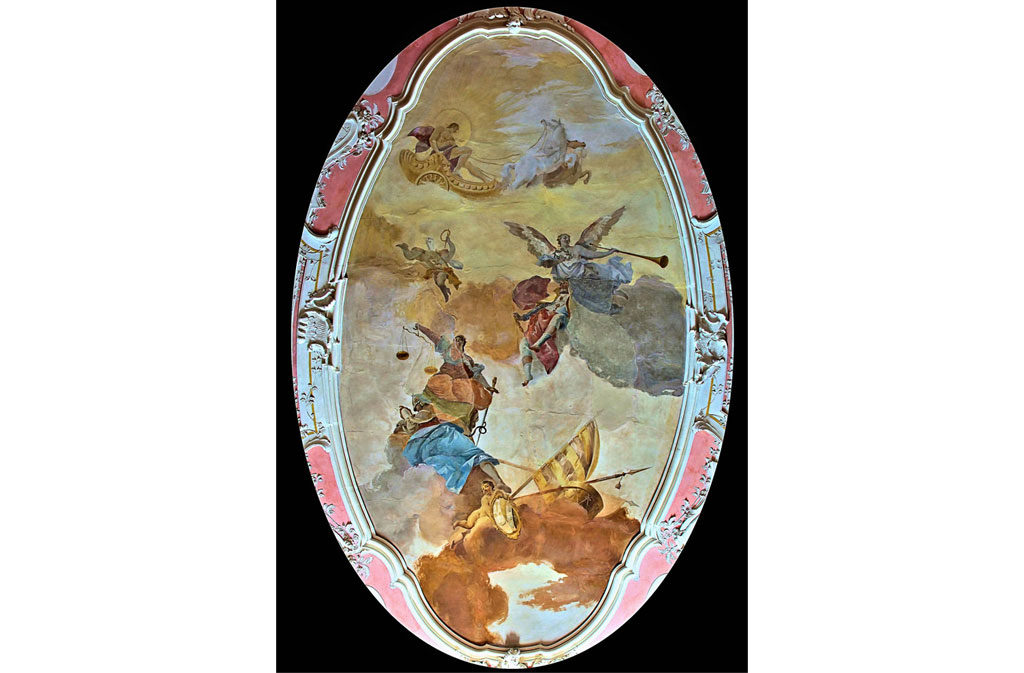 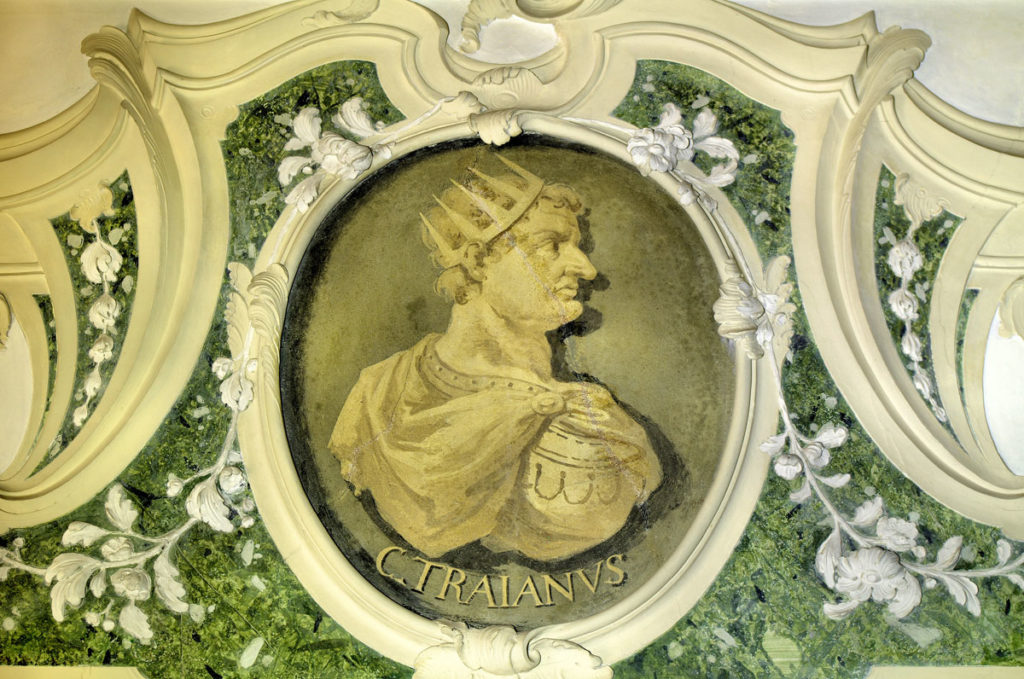 In the North room, the ceiling was completely reconstructed in the 19th century, with chalk stuccoes applied on painted plaster. The walls still reveal their original decoration and host five oil-painted canvases, which have been largely re-painted and may be ascribed to Fabio Canal. They represent episodes from the Old and New Testament: “the Healing of the Paralytic”, “David with the Head of Goliath”, “the Escape to Egypt”, “the Adoration of the Magi”, “Moses Bringing Water from a Rock”.

In the South room, many parts of the ceiling have fallen, making it impossible to identify the motive of the central decoration. The freshness and lightness of the stuccoes are in contrast with the funny small scene on the fireplace, underlined by the motto “so will I lead you since you are crazy”. This unitary cycle was most likely created by Venetian artists. The decoration in the room were concluded in 1766.

The salon gives access to Centro Studi Biblici, opened in 1977, while the internal garden leads to the two-floor building housing the Parish Historical Archive.