Majestic and solemn, spiritual place and guardian of the city’s art and history.

A Duke of Friuli, the bend of a river crossing a royal street. In 796, a small shrine was built and a city was born.

For its size and solemnity, Duomo di San Nicolò is certainly one of the most evocative sacred buildings in the region. It stands in the square with the same name, which is actually the ancient “plazuta”, where the medieval tracks converge. In this square Henry, Duke of Friuli, founded the city’s first church. The current building was constructed on the plan of the previous one between 1474 and 1496, under the supervision of Beltrame and Vittorino da Como.
The Renaissance-style façade is well proportioned and divided into three levels by the intersection of vertical pilasters and horizontal beams. Its top houses three stone statues of Saint Nicholas, Madonna and Saint Liberal, which were ascribed to Giuseppe Giordani.

The bronze portal features scenes from the Old and New Testament and was designed and partly crafted by Pino Casarini, who also created the apse’s frescoes. After the artist’s death, the works were completed by Don Luciano Carnessali, priest and artist from Trentino region.

The bell tower stands high above the square, even though recent earthquakes have caused it to lean to one side. Built with bricks in 1568 according to a project by Domenico da Como, it is fifty-two metres high and terminates with an octagonal pinnacle surmounted by a 2.60-metre-high bronze anemoscope angel, standing there from 16th August 1957.

Inside, Duomo di San Nicolò features three naves separated by Gothic arches resting on columns.
Its Latin cross plan is characterized by a polygonal apse. The structure of the ceiling is visible and is made of wooden trusses.

The presbytery can be accessed through a majestic triumphal arch, where Pino Casarini carved the twelve apostles and the Annunciation at the top, and painted the frescos in 1946. The centre of the apse is decorated with a representation of the Virgin Mary and Child on throne, surrounded by Saint Nicholas, Saint Liberal and rows of saints and angels playing musical instruments. The left wall of the choir depicts the Crucifixion, while the right wall hosts the Resurrection. The vault is decorated with the symbols of the four evangelists. The main altar is made of marble and adorned with statues of Saint Jerome and Saint Francis 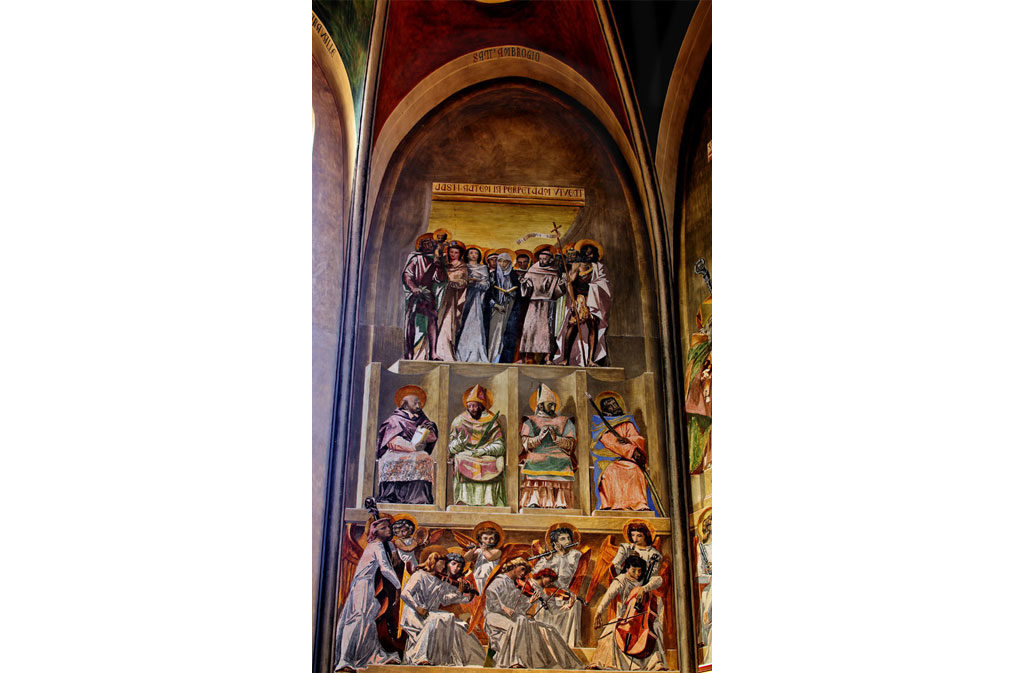 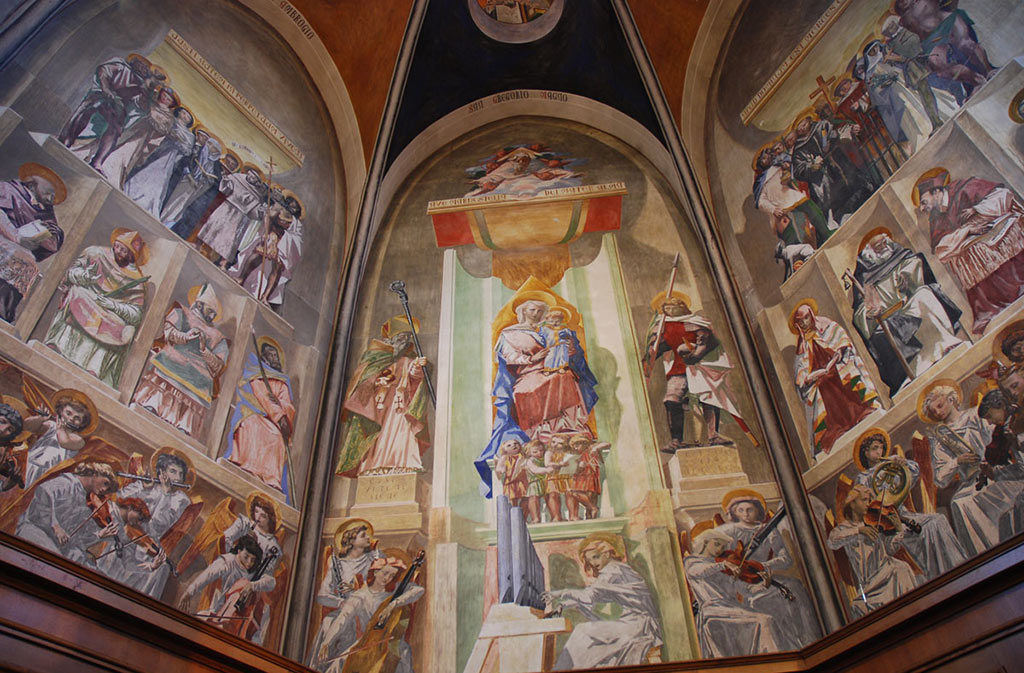 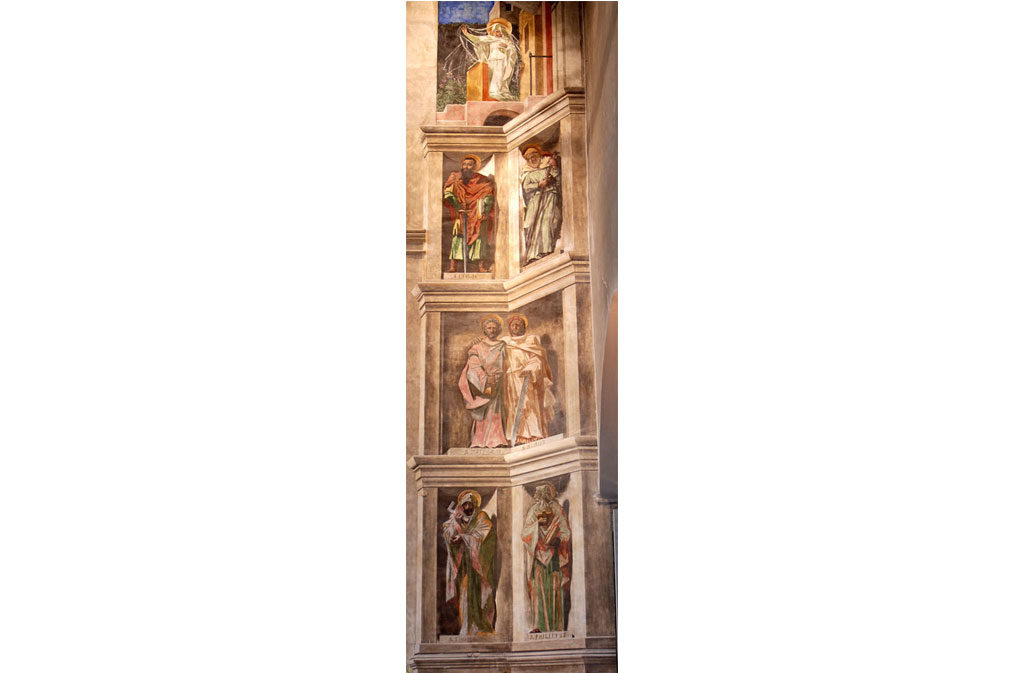 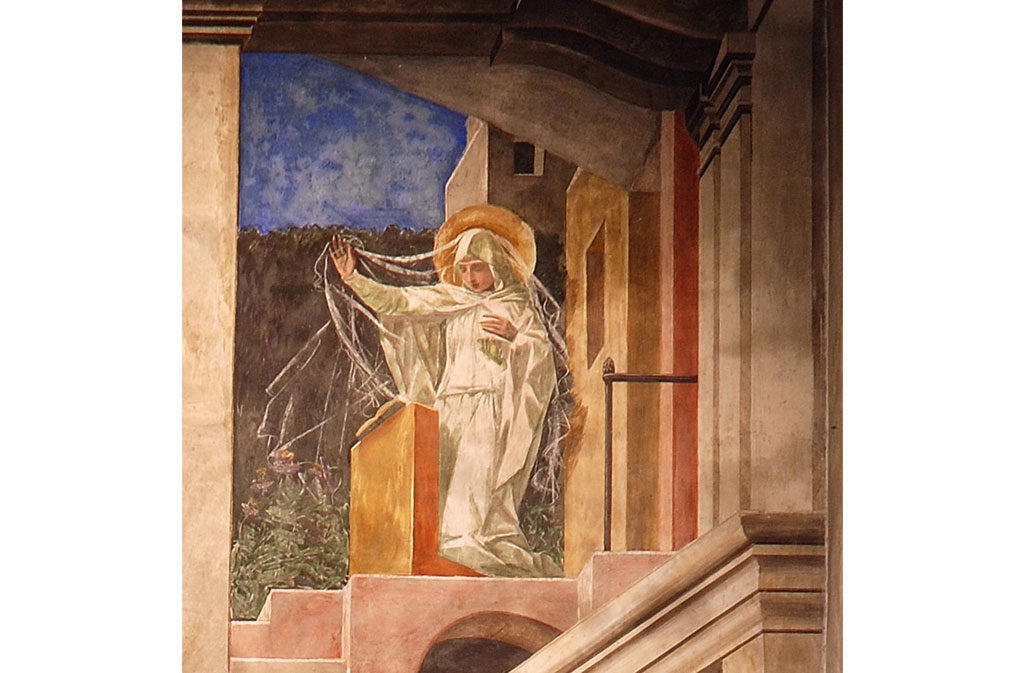 Cappella con altare di San Liberale is located to the right of the presbytery. Formerly housing the Blessed Sacrament, the chapel was refurbished after the earthquake of 1936 to receive the altar from Chiesa di San Liberale, which had been destroyed.
The statue of Saint Liberal has been ascribed to Paolo Callalo and is flanked by the wooden statues of Saint Anthony the Abbot and Saint Dominic, formerly belonging to the demolished church “chiesa nova di Santo Antonio” adjoining the Monastery of the Dominican Sisters.
Cappella del SS. Sacramento is located to the left. Designed to house the Blessed Sacrament, it is decorated by Pino Casarini’s Sacred Heart of Jesus in the background. 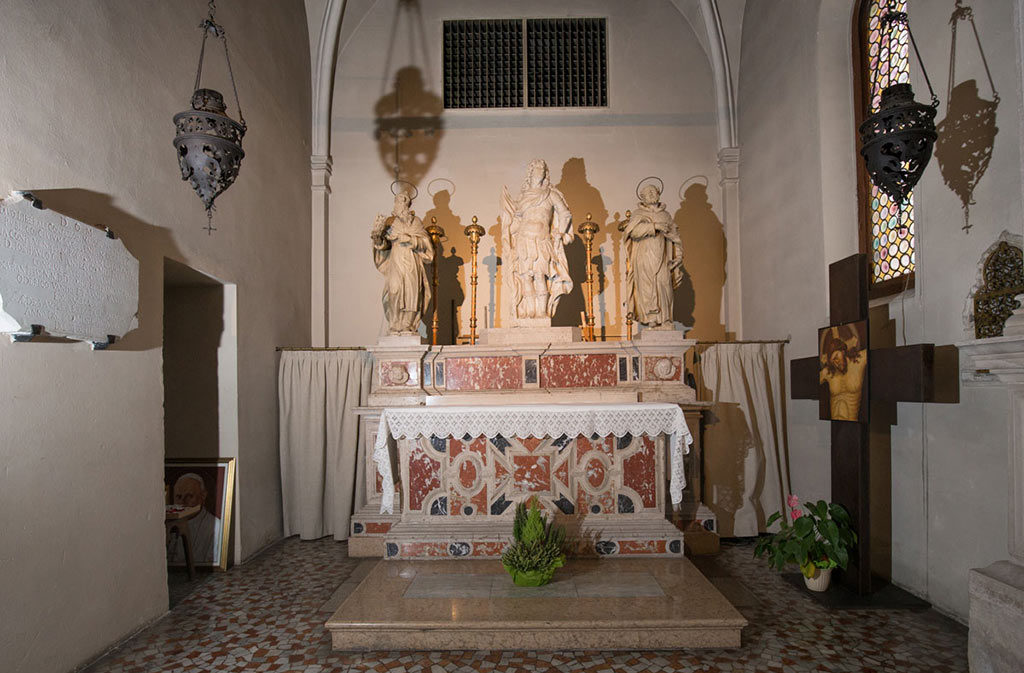 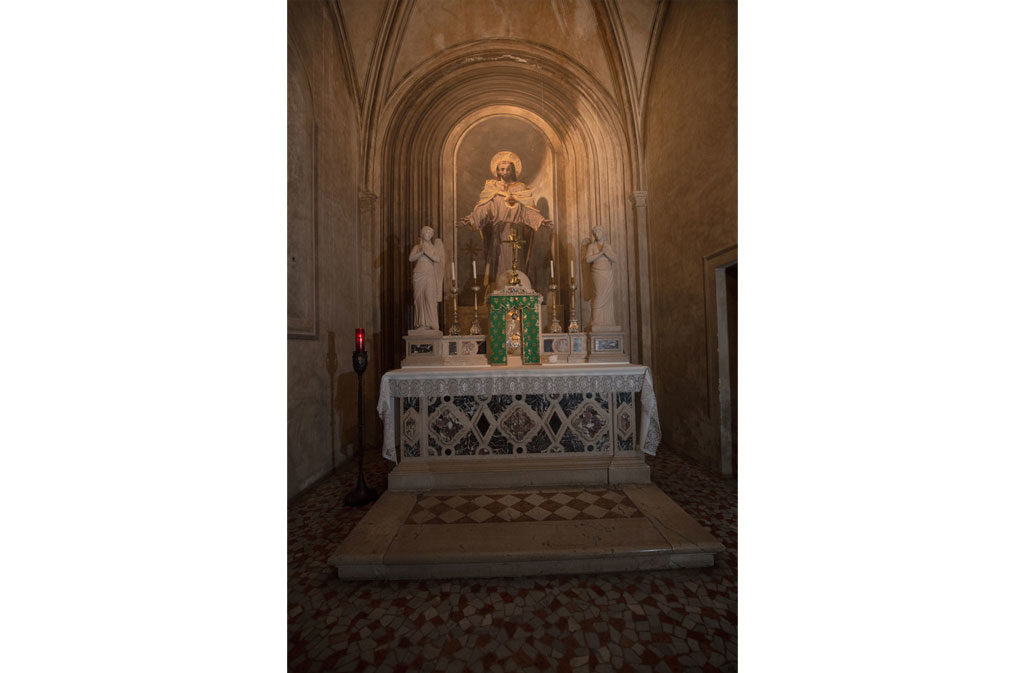 THE ALTARPIECES IN THE NAVES OF DUOMO

The Baptistery of the Duomo is a precious wood work created at the beginning of the 19th century by skilled wood crafters. Their art is best expressed in the dome: herringbone patterns made with woods of different colours are paired with motives of laurel leaves. It is topped by an ancient wooden statue of Saint John the Baptist, which can be dated between the 15th and 16th century. Six beautiful rectangular wooden panels represent flowers with lucid brass stems, recalling the 17th-century Venetian art.

Built in 1939, the chapel hosts a 18th-century altar and marble crucifix. The walls display the fragments of a frieze representing sibyls and prophets with flowers and cherubs, created by Antonio Zago at the end of the 15th century to decorate the main nave of the Duomo.

Almost a small Venetian square, located on one of the two island created by the river, Piazza Duomo was once called “City”. It is Sacile’s oldest part, the historical heart of commerce: two ancient “contrada” branch out from here, hosting houses with porticoes and ample columned ground floors, in accordance with the classic structure of workshops in the Commune period.