A trip to the heart of Sacile’s history among art, nobility and governments.

Palazzo Ragazzoni is the symbol of Sacile and of its bond with the Republic of Venice, and is the ultimate representation of 16th-century splendour. It is also known as “the place of delights” for its abundance and luxury, and acted as a reference for Kings, Popes and Emperors.

An elegant architectural structure, named after the last families who lived in it, Palazzo Ragazzoni is the best representation of Sacile’s rich past. It was built upon a previous 15th-century building in the second half of the 16th century. Its redevelopment was fostered by the illustrious Ragazzoni family, Venetian ship-owners and merchants. The strongest will was that of Giacomo Ragazzoni, who had settled in Sacile to strengthen his family’s land-holdings. Giacomo Ragazzoni hosted Henry III of Valois, son of Catherine de’ Medici: the event was among the most spectacular in the Republic of Venice, with Giacomo Ragazzoni welcoming hundreds of illustrious guests and offering music and dances. Giacomo Ragazzoni also hosted the Empress Mary of Austria, daughter of Charles V and widow of Maximilian of Habsburg, who later sent many words of appreciation for the hospitality. Close to the building, a plaque marks her visit.

The ancient architectural design is still visible although only inits central parts, with their precious façades: the facade looking onto Viale Zancanaro features a triple-arched window and a luminous four-arched window with columned balustrades and 17th-century-style friezes, where as the facade looking on to the river Livenza features a five-arched window with a sill at the height of the noble floor and bears traces of the shootings by the division of the Italian army IV Battaglione Bersaglieri, who fought to defend the city on 6th and 7th November 1917.

The main courtyard shows the remains of 12 stucco statues from the school of Alessandro Vittoria (1525-1608).On the inside, splendid frescoes were created by the famous Mannerist painter Francesco Montemezzano, an artist from the school of Veronese, at the end of the 16th century. The evocative pictorial cycle consists of six large scenes enclosed in exquisite decorative patterns and shows the glory of the Ragazzoni brothers, Giacomo and Placido, with the rulers of the time: Mary Tudor, Philip II of Spain husband of Mary Tudor and brother of the Empress Mary of Austria, Henry III of France, Mary of Austria, the Doge Sebastiano Venier and the Grand Vizir of Constantinople. As a result of reductions in the building’s structure, the salon is adjacent to a private chapel with precious stucco decorations from the early 18th century depicting cherubs and floral patterns. The frescoed salon opens ontothe building’s East Wing, which has just been refurbished. To reach it, it is necessary to walk through saletta della bandiere (hall of flags), an exquisite room completely covered in frescoes representing the symbols and flags of the nations related to the Ragazzoni family. “Saloned’Onore” (Salon of Honour) is located to its left: this majestic ballroom is characterized by a wooden walkway which preserves part of the walls of the upper floor, which aredecorated with mythological and allegorical figures. On its shorter side, the Salonis lit by a suggestivefive-arched window. It also hosts a beautiful, ornate wooden ceiling. The most distinguished guests to visit this building, which was later acquired by the Venetian Flangini family, were Pope Pius VI (1782) and Napoleon Bonaparte (1797). Since 1936, by order of the last Lacchin heirs, Palazzo Ragazzoni belongs to the City Council, hosting important cultural and tourist events. 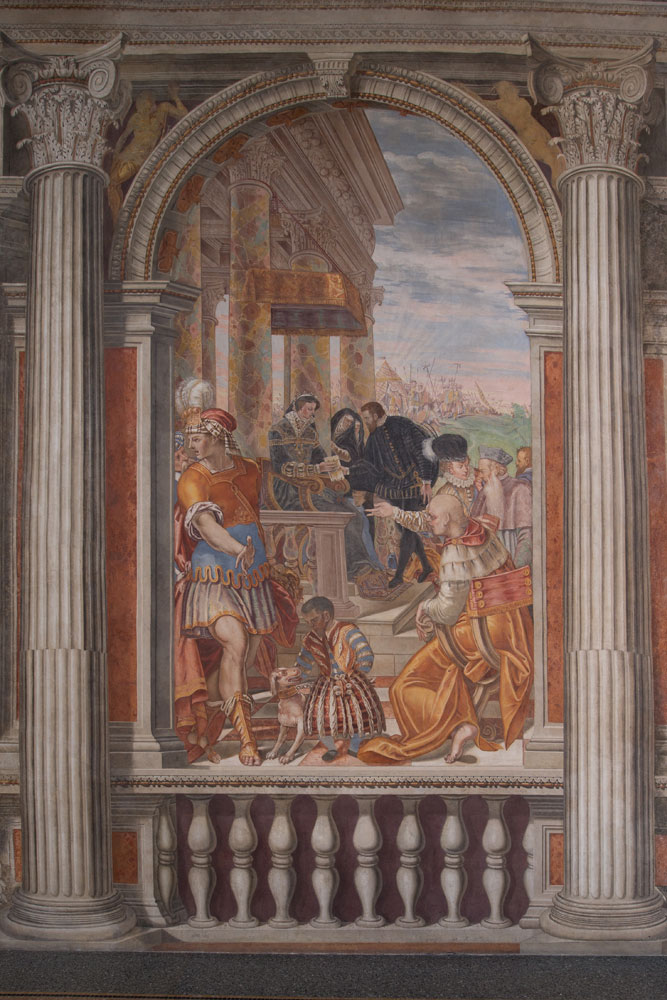 Giacomo Ragazzoni receives the Rose of Tudors from Mary Tudor, Queen of England, to be added to the family emblem. 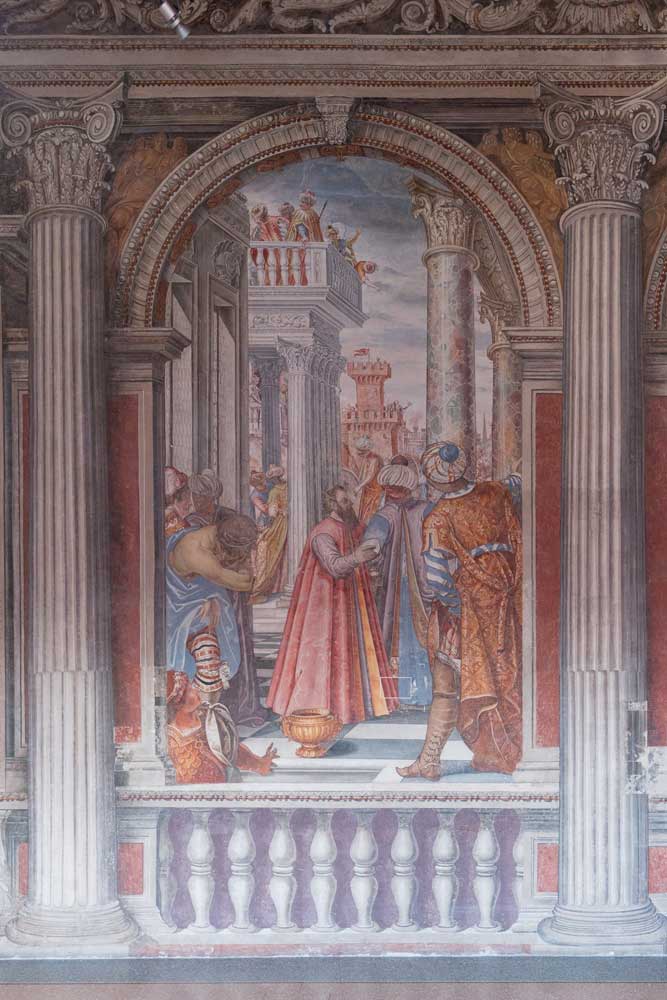 Giacomo Ragazzoni negotiates with the Turks in Constantinople on behalf of the Republic of Venice to free the merchant ships and crews held hostage by the Ottoman Empire. 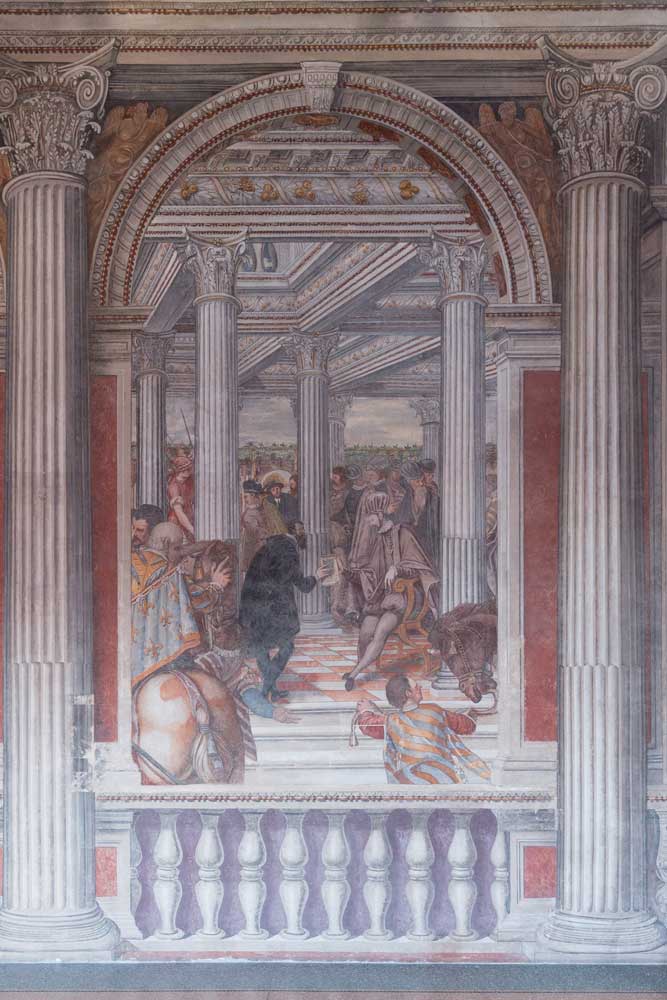 Henry III, thankful for the hospitality at Palazzo, allows the Ragazzoni family the privilege of adding two French lilies to their emblem. 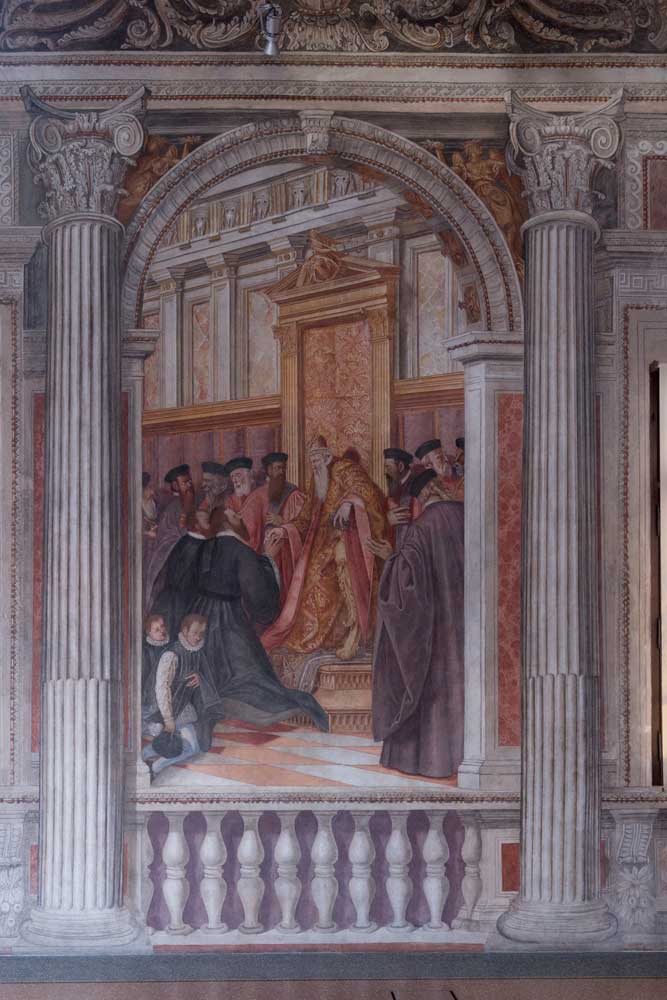 Giacomo and Placido Ragazzoni receive the ring and investiture of Count of San Odorico by Doge Sebastiano Venier. 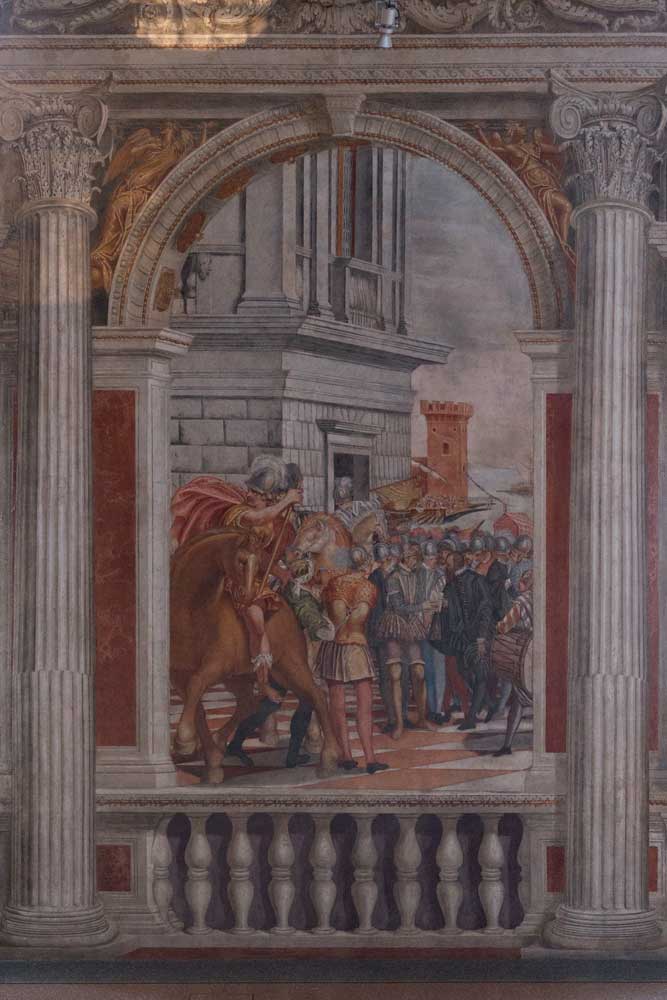 Placido Ragazzoni is declared Knight of the Order of the Holy Spirit (Ordre du Saint-Esprit) by Henry III King of France, receiving a blue ribbon, symbol of the order. 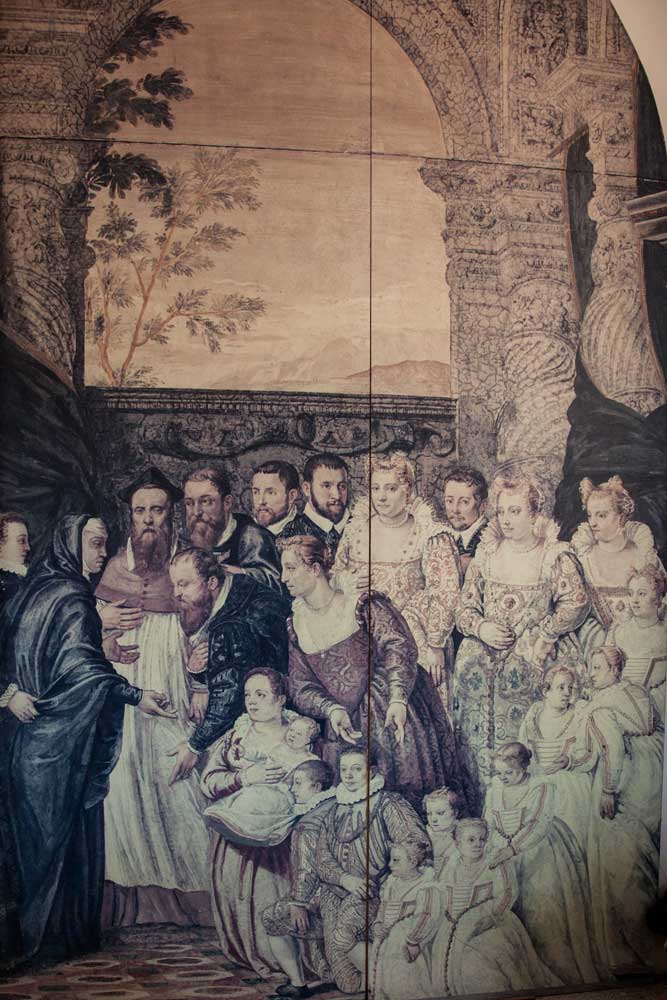 Giacomo Ragazzoni and his wife Picabella, portrayed among their off spring and relatives, receive Queen Mary of Austria. Hosted in Sacile while travelling to Spain to visit her brother Filip II of Spain, she particularly appreciates the hospitality, company and conversation with Giacomo’s daughters.

The hall of flags is a unique room connecting SalonedegliImperatoriand Sala del Ballatoio. The visitors are delighted by the diverse details in frescoes. The walls are decorated with the symbols of the nations which developedcommercial and political relations with the Ragazzoni family: the English crown, the Austrian Imperial crown, the French crown, the Venetian Republic, the Papal Statesand the Muslim countries.

Set of flags of the Austrian Imperial Crown with a double-headed eagle.

The lilies of France and the royal crown witness the relations between the Ragazzoni family and the French Monarchs, particularly King Henry III.

The crescent and turban represent the Ottoman Empire, an important commercial and diplomatic partner for Giacomo Ragazzoni.

The banners depict the symbols of the British crown, a fundamental contact for the commercial success of the Ragazzoni family, also representing Giacomo Ragazzoni’s first important diplomatic success.

The Lion of Saint Markand the doge’s cap symbolize the Republic of Venice.

Sala del Ballatoio, called “Salone d’Onore” (Salon of Honour), borders four big rooms constituting the magnificent noble floor. On the bottom, the glass doors of afive-arched window lead to a balcony looking onto the river Livenza.
Above the doors, 18th-century-style white stucco bas-reliefs lie on a green background. The salon communicates with a wooden walkway which still bears traces of original decorations. The frescoes on the upper walls depict mythological episodes and allegoric figures.

The noble chapel was built and decorated in 1615, after Giacomo Ragazzoni’s death, upon his will. The decorations are ascribedto Sasso, a skilled Venetian stucco artist from Ticino area.
Still visible today, the work witnesses the artistic transition from baroque to rococo, which was extremely widespread at the end of 17th century- beginning of the 18th century.
Various symbols are used to represent the union of religious themes and bucolic and rural environment.Cherubsindicate the catholic triumph and “Divine Grace”, as in the scene above the door, in the centre, where two cherubs hold a basket with the instruments of Passion, whilea maid, a hunter and flying birds are depicted ina landscape onthe background.
Around this scene, other cherubs show some instruments of martyrdom like pincers, a hammer and nails.
The rich decorations in arabesque style on the spherical part of the vault give an abstract and laic interpretation of the Sacred themes.

Between 1533 and 1573, Tobia Ottoboni owned a simple, massive manor house bought from the Pelizza family

In 1573, the Ragazzoni family bought the building from Ottoboni and enriched it with stables, barns, cellars, gardens, viewpoints, extensions and new wings with richly furnished large rooms. The building thus became luxurious and welcoming, andwere used by the Republic of Venice as a venue for illustrious guests.
Kings and Emperors, Counts and Barons: the finest representatives of European aristocracy were hosted here. Between 1627 and 1638, the building became property of the Republic of Venice.

In 1638 Alvise Flangini bought the building, which served as a family residence until 1804, when the last Flangini passed away.

The heir of the last Flangini countess quickly sold paintings, furniture and carpets to the highest bidders. The building was bought by Saccomani and Friedenber.

In 1913, they dethatched a compartment (most likely the best preserved one) and sold it to the collector Otto Lingners, who donated it to Staatliche Kunstammlungenin Dresden Museum, its current location.

Long abandoned, the Palazzo was bought in 1928 byKnight Giuseppe Lacchin, alocal industrialist. In 1934, after his death, his sister Lucia Lacchin followed his will and donated it to the City of Sacile with a conspicuous amount to be used for refurbishment works. This generous act allowed the city to preserve and manage the precious artistic work that is currently of great importance to the community.

EMBLEM OF THE RAGAZZONI FAMILY

The Emblem of the Ragazzoni family is located on the facade of the Palazzo looking onto Viale Zancanaro, above the massive four-arched window with a columned balustrade and 17th-century-style friezes.
The heraldic writing is still readable: “ AFFULGENT PARTA PATRIIS” (the sons will be the glory of their fathers), while any reference to family symbols hasbeen completely erased.
Giacomo Ragazzoni’s biography included the description of the emblem: a crest with abejewelled female arm, covered in precious stones, holding a golden rose (nobility), with a heliotrope (universality of the title of nobility) and a pomegranate (wealth). The sides of the elm are decorated by swirls of acanthus leaves, while the shield is characterized by a golden rose (the Tudor’s rose), two lilies (the King of France) and two diagonal axes above three suns.